It’s been a few years now since I discovered Iamthemorning.  Their first album “~” is still one of the best debuts I’ve ever heard, and their sophomore album “Belighted” was a step forward instrumentally.  There was a major difference between the two, however, as the former felt more like the band’s neoclassical chamber music roots while the latter had more of a progressive/Porcupine Tree spin to it.  Now, these amazing artists are back with their third album, “Lighthouse”.  Usually I would insert some sort of vague rhetorical question here about where or not the album is any good, but this time I’ll be blunt.  “Lighthouse” is an artistic and musical masterpiece of the highest order.

But let’s not get too far ahead here.  Iamthemorning hails from St. Petersburg, Russia, and they are far more than your average prog band.  Members Marjana Semkina (vocals) and Gleb Kolyadin (keys) are “normal” people that work for their living, but they devote the time they have to creating art, even outside of music.  The passion and belief they have in their work can be felt like electricity through your speakers as Marjana emotes and Gleb roars over the ivories.  For “Lighthouse”, however, they are joined by some very notable guests: Gavin Harrison (Porcupine Tree, King Crimson) on drums, Colin Edwin (Porcupine Tree) on bass, and Mariusz Duda (Riverside, Lunatic Soul) features on the title track.  That is quite some line-up there, and I suspect this is the makings of a prog nerd’s midnight fantasies.

All the guests in the world mean nothing, though, without excellent music.  “Lighthouse” isn’t just excellent; it’s essential.  On this new album, the band has seamlessly connected back to their neoclassical roots more firmly, but still have an expanded instrumental palette and an eye on progressive rock, as well.  It’s almost as if they have fully embraced their chamber music past by expanding that sound to an orchestral, cinematic scale.  That expansion is primarily driven by an ethereal, underwater feeling that oozes out of every track.  Yes, the gorgeous cover art is very appropriate to the tone and indescribable feelings I get from this album.  Additionally, the album feels far more fleshed out, too, with an array of electronic, jazzy, and folksy elements to contrast the overall theme. 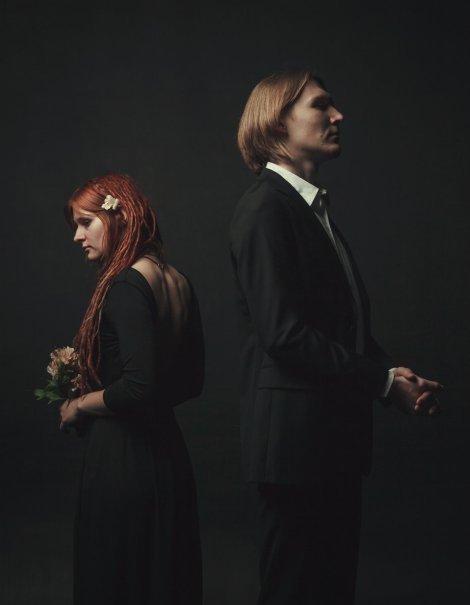 Instrumentally, these musicians outdo themselves.  Marjana sings with gusto and emotion, like always, but I feel like her vocal lines are significantly more difficult this time, and she maintains a good focus on spaciness to fit the theme.  Her lyrics, too, are the very definition of class and elegance; full of grace and deep longing, being about the progression of mental illness (a very difficult topic to discuss).  Gleb, like always, is a beast on the grand piano.  His neoclassical vibes have a strong presence throughout the album, especially since there are some sublime instrumental tracks for him to tackle.  Gavin’s drums are flawless, as expected, and I do feel like he is utilized more here than he was on “Belighted”.  His fills feel so natural with the music, almost as if he wrote the drums sitting in the same room with the band.  Perhaps Colin’s bass is one reason for this, too, as his bass fills a gap that I think Iamthemorning had in their sound: a deep, rich bass tone.  And, even though Mariusz is only on one track—well, I’ll get to that in a bit.

“Lighthouse” is like a fine tapestry of various kinds of highlights; always gentle, classical, acoustically rich, and organized with great attention to detail.  The sound is mixed with impressive clarity and there is plenty of acoustic oomph to the rhythm section.  The album opens with “I Came Before the Water, Part 1”, a wonderfully mysterious vocal intro.  It immediately dives into “Too Many Years”, a track that might just be Iamthemorning’s greatest yet.  Featuring spacey guitars and an instrumental section near the end that is darkly classical with piercing woodwinds and abstractly and perfectly composed, the second track should be enough to win over anyone.  But the band gives us “Clear Clearer”, a track full of suspension and flotation, and then “Sleeping Pills”, which has a very cinematic, metaphysical quality to it.  The latter actually reminds me of some of Marjana’s side compositions she sent me once.

The album continues at full speed until it hits the title track, “Lighthouse”.  Featuring Mariusz Duda, this track took my expectations and simply blasted them off the planet.  It builds slowly but surely until it unleashes a duo between Mariusz and Marjana that absolutely steals the spotlight for the whole album.  Up until then, I thought the second track was the best thing the band has ever done, but this title track might take the cake.  It has one of the best melodies I’ve ever heard from any band, even Riverside.  It is truly a track that will give you goosebumps and will remain in your head for a long time.

The album continues with beauties “Harmony” and “Matches”, as well as the vocally rich “Belighted”.  And just when you think they can’t possibly put out another amazing track, their single “Chalk and Coal” hits, featuring diverse instruments and jazzy structure.  Finally, part 2 of “I Came Before the Water” and “Post Scriptum” finish the album with gorgeous trappings.  The latter is an instrumental piece that is quietly sensational, almost as if it is helping us process the incredible level of music we just witnessed.

“Lighthouse” is an album that ebbs and flows like the rich, green sea through my heart and mind.  I was expecting another great step forward, but this—this is an album that has left a deep impression on my mind.  It’s like a watercolor painting put to music, hitting all the right notes.  It combines the best of their original sound with the ambition and instrumental chops of their last album, crafting something very special and very near and dear to any progressive fan’s heart.  Lavish, abundantly inspired, and desperately good in every respect, “Lighthouse” is made for those who crave expression, beauty, and emotional power.