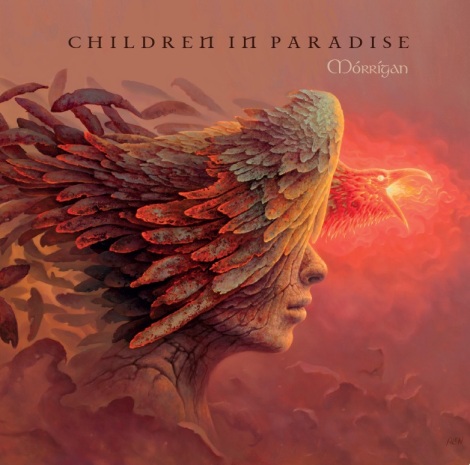 I gave out a single 10/10 rating in 2015.  In 2016, I’ve been feeling mildly disappointed by some of my most anticipated releases, so I have been approaching new albums with a certain dark cloud of doubt surrounding my experience.  Children in Paradise, however, have decided to break that mold with their new album “Morrigan”.  I was thoroughly impressed with their debut back in 2012 entitled “Esyllt”.  It was a sad, Floydian album that really scratched an itch for me at the time, yet the band has expanded both their band and their sound.

Children in Paradise consists now of Avec Gwalchmei on guitar and Dam Kat on vocals, guitar, and keys.  That is the primary duo on the band, but they have also employed Frederic Moreau on drums and Stéphane Rama on bass, seemingly having joined the band.  Additionally, you will hear guests Loic Blejean on Uillean pipes and low whistle, and John Kenny on the carnyx.  I’m sure that some of those instruments will puzzle you, but, believe me, they are a necessary part of this beautiful new album “Morrigan”.

Right away, I want to mention two things.  First, the artwork for “Morrigan” is simply stunning.  Artist Tomasz Alen Kopera really found inspiration and flow in his style for this album.  The cover, in addition to some of the other artwork floating around, is evocative and beautiful.  Also, the sound on “Morrigan” is impeccably mixed.  The instruments are perfectly balanced with rich, acoustic tones that make you feel as if the band were playing in your room.  That, my friends, is only the tip of this rich iceberg. 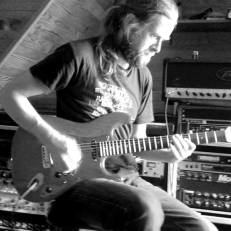 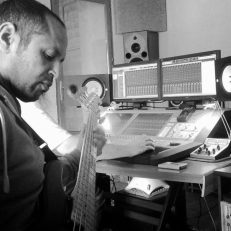 “Morrigan” is a tapestry of ancient sounds, rockin’ grooves, haunting vocals, and an emotional Romance.  It is a concept album revolving around the old Irish tale of Cú Chulainn, a ferocious warrior doomed to live a fate of battle and sorrow.  The story itself seems like an examination of the meaning and purpose of our existence, and one of the more enchanting scenes is the warrior’s death wherein a raven (the Morrigan) trips over his intestine, causing Cú Chulainn’s final moment to be a laugh.

As you can tell, the album is dark and macabre in tone, and the musicians have nailed that feel exactly.  Dam Kat’s vocals are a highlight here, being stirring, poignant, and varied in terms of style.  Her breathy vox are used for many purposes, even harsh tones that fit the story.  Avec’s guitars are literally some of the best I’ve heard in some time, and I expected as much.  He definitely has a Gilmourish slant, but he also expands that repertoire in both his excellent riffing (heavy at times) and also his many solos, as they have a slight classic rock feel to them, in addition to being very emotional and technical affairs.  Frederic and Stéphane form an amazing rhythm section.  Stéphane’s bass is growling and rumbling with rich sound and inventive grooves.  Frederic’s drums are the most surprising addition here, however.  He manages to create a torrential, driving beat that adds urgency and romance to the story, while at the same time being entirely appropriate for this band.  Additionally, the many Celtic instruments being used are piercing and quite gorgeous, adding an age and a personality to this album that you won’t find many other places.  Add all of this together with the rich sound of the mix, and you have a group that will be difficult to beat this year.

I’m seriously in love with “Morrigan”.  Every single song belongs and every single instrumental is inspired.  There is no filler here, and that’s a big deal in a year where I feel up to my neck in albums with tons of filler moments.  Whether it’s the fantastic solos by all the instruments, the breathy (almost floating) vocals from Dam Kat, or the venerable and mystical quality of the folksy focus, “Morrigan” is an album that will enchant and entrance you.  It’s not just the music, but the story and presentation, too.  It is a passionate, inspired package that will elevate your mind and soul.

My favorite tracks are difficult to name.  I absolutely love every track, but the highlights for me are “I’m Falling” with the creep factor, “Cú Chulainn Is Mine” for its glorious chorus, “Stay” for its haunting pipes, and “In My Mind” for just being an all around awesome track (probably my favorite on the album).  From the beginning grooves to the ending pipes, however, “Morrigan” is as close to perfect as I’ve heard this year.  It is an album of intensity, artistry, character, and romance, and I can’t get enough.

2 responses to “Children in Paradise – “Morrigan””