Rick returned late in 2015 with another album of dark, melodic tunes, the followup to 2014’s Heart of Darkness and a further addition to his 11+ album discography.  Following in the same stylistic vein of dark, spiritual ballads, Miller’s newest release utilizes the same styles of instrumentation – primarily acoustic instruments with warm timbres – and composition: ethnic rhythms infused with poetry and electronica, as well as employing metal-influenced vocals and secondary guitars.

As on previous releases, Rick is joined by a number of guest musicians.  Kane Miller provided acoustic guitar and violin; Sarah Young, flute; Mateusz Swoboda, cello; Barry Haggarty, electric guitar; Will, drums and percussion; and Ruth Archer contributed lyrics alongside Rick’s.  Maintained in the songwriting for Breaking Point is a strong sense of turbulent emotions, of pining and self-flagellation for past failures.  Of course, the implication of the album’s title is that every man and woman has that one final barrier that, once crossed, becomes a Rubicon or a precipice – a final, emotional breakdown from which there might not be a return.  Each track on the album riffs with such ideas.

Breaking Point begins with the instrumental track, “Battlescars”: a lush, three-and-a-half minute overture of orchestral string arrangements.  “Shades of Grey,” the next tune, grinds immediately into high gear on the fading heels of the opening track.  Only three minutes long, this song contains some gorgeous guitar playing over a gritty, nu-metal-esque bed of undergirding instrumentation.  “Tears of Blood,” Breaking Point’s epic-length composition, opens with ethereal guitar work and prominent flute, working in contrary melodies to the steady, eighth-note progressions on the acoustic guitar.  It isn’t until the other side of a semi-cacophonous passage, beyond the 5:00-minute mark, that we begin to hear singing.  Another movement begins at the 6:45-minute mark: an odd-metered, cyclical, instrumental section, with a sympathetic-stringed instrument droning beneath the mix.

The next track, “Suspirar,” is another instrumental – a tense piece of ambient writing, overlaid with the visceral sounds of heavy breathing and a gorgeous latin-jazz-style solo on a nylon-stringed acoustic guitar.  “Deep in the Dark” is another minor-keyed, guitar-led ballad, with aching string textures, gentle piano, and an undercurrent of bass movement that supports the melody.  A breakdown prior to the 3:00-minute-mark introduces another staple of Rick’s work: brief inserts of spoken word poetry, introspective moments that starkly reveal the speaker’s inner torment.  Bookending “Deep in the Dark” is another instrumental and the album’s title track: the four-minute, arpeggiated “Breaking Point.”  “White Dogs (including The Raven)” is really a dual composition: strings and flute accompanying acoustic guitar for the first two-and-a-half minutes of “White Dogs,” then transitioning into the dark, rhythmic ambience of “The Raven’s” spoken word theme.

Breaking Point’s final composition to feature vocals is “Smoke,” a 7:00+ minute track that thematically echoes “Shades of Grey” by delving into the moral ambiguity of self-medicating under the burden of emotional trauma – the smokescreen of broken hearts and crushed desires that makes taking “one more pill” or sipping from the “lotus flower” all the more justifiable.  This is a multilayered composition, transitioning several times over the course of its segments from gentle ballad – mellotron-esque keys and strings – to arpeggiated electronica, to complete self-deconstruction.  “The Eyes of Skye” concludes Breaking Point with the sounds of thunder and mournful, instrumental themes.  The powerful, dynamic combination of strings, acoustic guitar, and flute are accompanied by dark choral “ahhhhs” and an ambient layer of keys. 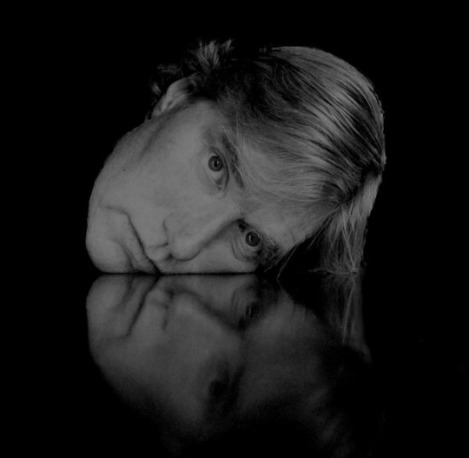 I have great appreciation for the rich and primarily organic approach Rick Miller brings to composing.  He lends great focus to dynamics and emotive swirls of ambience.  All said, however, Breaking Point is ultimately more of the same.  There isn’t all that much to differentiate Heart of Darkness and Breaking Point from one another.  Listened back-to-back, Heart and Breaking Point could overlap into one double LP, and not necessarily because they were intended to pair that way.  Furthermore, there are also some very close lyrical similarities – “Shades of Grey,” the album’s first track with lyrics, for example, even utilizes the “heart of darkness” metaphor – and the dark-and-tortured-soul mantra tends to be overused.  Even within itself, many of Breaking Point’s songs seem to tread very familiar paths.  Rick certainly has the ability to write earthy, sensual tunes and couple them with poignant word pictures that together move the listener, but after a while, they all begin to sound very similar to one another.  There’s undeniably nuanced performance and gorgeous instrumentation on every track of Breaking Point.  There’s neat transitions and wonderful textures throughout.  But my interest still begins to waver, simply because the song structures begin to feel very similar, even down to the constant minor tonality and chord progressions of each composition.

On the other hand, if I had to point to one thing that does differentiate this release from its forerunner, I’d highlight its plethora of spacious instrumental tracks and interludes.  I particularly enjoy the instrumentation that Rick employs in these moments and the varied ways these different musical textures interweave.  There’s plenty of flavor and variety to be had in the moments where flute or acoustic guitar take the lead voice and toy with overarching musical themes.

Again, my criticism of Breaking Point is simply that Rick isn’t really doing anything different this time around.  But of course, if he truly is retracing his steps, he still manages to sound really good while doing it.