Every once in a while, an album comes along that I should love, at least in theory.  But, for some reason, it just doesn’t click with me, and I just can’t bring myself to like it.  Unfortunately, I think the new album, “Shifting the Equilibrium”, from Unified Past is one such album.  I’ve seen quite a few people excited about this new album, and I can understand why.  This is a band with a varied style and a ton of heart.  That’s nothing to dismiss easily.

Unified Past, as I said, have a varied sound with hints of all sorts of styles.  They sorta remind me of an 80’s hair metal band that discovered 70’s Rush albums in their attic.  That’s honestly not a bad thing, as I like my fair share of 80’s hair metal (more so than Rush, to be honest).  The band also stumbles into moments that remind me more of neo-prog, such as Pendragon or Marillion.  In other moments, a more metallic side comes out in them.  In the end, it’s the mix of 80’s tones, hard rock solos, crazy synth, and very simplistic vocal melodies that makes Unified Past feel so familiar in more than a couple ways.

On the other hand, though, “Shifting the Equilibrium” just feels like something is missing.  Don’t get me wrong here: the band has really put out an outstanding album in terms of performance.  The musicians here are Stephen Speelman on guitar and keys, Victor Tassone on drums, Dave Mickelson on bass, and Phil Naro on vocals.  These guys are burning up fret boards, smoking the keys, beating the hell out of the bass, and so on.  The strongest parts of this album, in my opinion, are Stephen’s intuitive guitar licks and wild synth, but all of the musicians here are top notch and play some really difficult stuff.  But is performance all that matters? 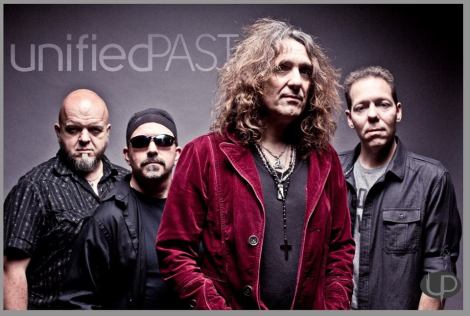 Obviously, the answer to that question is “no”.  For every strong instrumental on this album, there is a misplaced and even obnoxious vocal melody.  For every synth party, there is a drudging heavy riff that just doesn’t feel right.  In fact, the musicians, as good as they are, often feel like they are playing completely different songs simultaneously.  I especially got that feeling with “Smile (In the Face of Adversity)” where the keys and guitars often feel estranged for one another.

“Shifting the Equilibrium”, then, is tough to rate.  “Erasure Principle” is a mostly brilliant song, and other tracks have moments that feel so good and so nostalgic.  Yet, much of the album comes across as awkward, uninspired, and full of filler.  I especially  get this on tracks like “Deviation from a Theme (of Harmonic Origin)” and “Today is the Day”.  Even though these tracks aren’t really that long by prog standards, I feel like the contain only a few minutes of real and inspired content.

But let’s talk about vocals for a second.  I honestly feel that Phil’s voice is a great disservice to Unified Past.  I can’t help it.  His voice is high-pitched, uneven, and incapable of carrying a true melody.  Sometimes all of these things aren’t necessarily bad, but, for this album, the very simplistic, repetitive, and even annoying vocal melodies weren’t helped by a voice that is obviously out of its element.

So, for every ethereal moment of transfixion that “Shifting the Equilibrium” brings, there is a disappointing moment that rips me out of the experience.  Cool artwork aside, I don’t feel like this album is anything more than sorta okay.  With the resurgence of progressive rock in the last few years, “okay” isn’t enough.  We can all tell when the instrumentals are just filler or when the songs are stiltedly put together with little or no inspiration.  We can tell.  So, in an age where progheads were starving for new albums, this might seem amazing.  But with all the terrific music releasing now, I’m afraid that this album is just a footnote.

One response to “Unified Past – “Shifting the Equilibrium””