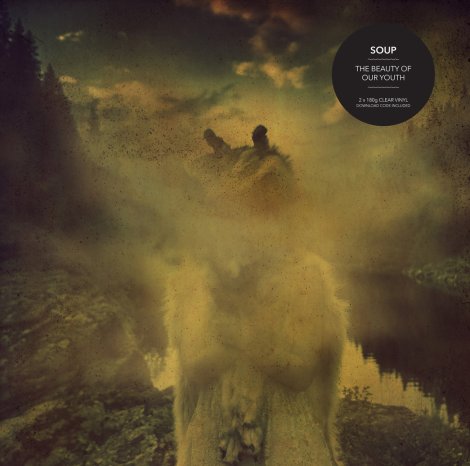 This review is from almost exactly two years ago, October 24th, 2013 (sometimes I waited to post for a couple weeks), back when I was writing for powerofmetal.dk.  Soup was a band that I stumbled upon unknowingly, and this album made my top 25 of the year.  You know, I don’t recall see more than one or two other reviews for this album, and that’s a shame.  They would appeal to fans of modern prog, indie rock, and even post rock.  I think Soup needs some more attention.

The strength of material released in 2013 is continuing to astound me. From established bands to artists that are suddenly coming out of the woodwork, this year will be remembered as an incredible year. Case in point: the new album from Norway’s Soup. Attracted as I was to
the cover art and general tone of the album, I was excited after I heard “The Beauty of our Youth”.

Soup have a certain amount of familiarity about them, but they still have their own sound. They remind me of a mix between Anathema and The Pineapple Thief, but that doesn’t quite cover it, either. They feature climactic melodic progression similar to Anathema, but also a grounded rustic quality like that of The Pineapple Thief. Add to that a bit of Muse, a slight indie influence, and a talented violinist, and you will start to get a picture of how this album sounds. Melodious, soaring, upbeat, orchestral, and magical at times, Soup’s third album leaves quite an impression both musically and lyrically.

I was immediately taken with the nostalgic ambiance throughout “The Beauty of our Youth”. If it weren’t already apparent by the title, I think nostalgia was the very point of this work. Youth really is like a dream. I can remember the “good old days”, and somehow I forget all the bad times. This album is a tribute to those memories.

Soup has quite a way of incorporating these glorious feelings into their music through ascending melodies and even group singing. This is especially apparent on “Transient Days”. Other favorite tracks include “Our Common Ground” with its excellent violin lines, and the
wistful “Memoirs of an Imaginary Friend”. Every song, however, is strong and provokes emotion, at least for those of us that want to reach out and remember better days. I’m really thankful for this glorious new release from Soup, and I really wish them the best for future
endeavors into progressive music.