For some reason, I was taken by surprise when I heard Norway’s Gazpacho would be releasing an album this year.  Their previous album “Demon” held very strongly with me, so strongly, in fact, that I had finally just gotten a physical copy for myself.  So, to hear that the band were set to release “Molok” only a year after their previous masterpiece, well, that obviously kinda worried me.  The first thing I noticed, though, was the even darker and more “evil” title.  What’s going on with these guys?

The answer to that is “brilliance”.  After writing about a killer in “Demon”, Gazpacho has created one of the most complex and interesting concepts I’ve ever heard in “Molok”.  Now, the band has given a complete explanation of the concept on their Facebook page, so suffice it to say that it’s a story about the conflict between science and religion, taking a rather moderate position on both.  It involves the concepts of the Tower of Babel, chance, mechanical evolution, and so on.  Ultimately, though, it’s about a man searching for God through his own mechanical creation, trying to boil the concept of “God” down to numbers.  It’s fascinating, to say the least.

In step with this deeply satisfying and mysterious story, the band has once again created music that somehow merges dark, guttural themes with laid back, melodious, almost upbeat music.  I say “almost upbeat” because the music is certainly not bright and happy, but somehow comes across as clean, innocent, and simply gorgeous.  The band uses a multitude of sounds to make this happen, including accordions and mandolins.  The band, indeed, seems to shine in those folksy moments. 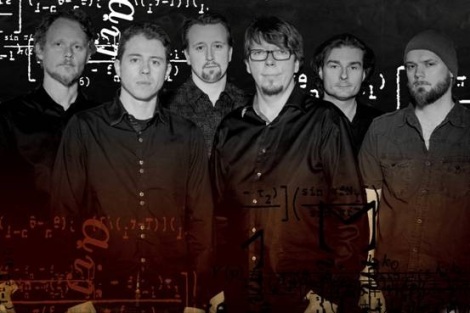 Speaking of the band, it includes Jan Henrik Ohme on vocals, Jon-Arne Vilbo on guitars, Thomas Andersen on keys, Lars Erik Asp on drums, Kristian Torp on bass, and Mikael Krømer on violin and mandolin.  What impresses me with this group of musicians is that, even though the music comes across as laid back, it is certainly far more complex and even technical than you realize at first.  And when you combine the waning sounds of Jon-Arne’s guitar with Thomas’ delicate and xylophone-like keys, you get a vanilla-chocolate dichotomy where the dark meets the light and we are all the better for it.

I need to discuss the other musicians, though.  Lars on drums has once again trounced my expectations, presenting us with dramatic fills, technical grooves, and a light hand that manages to do this all professionally.  It’s perfect drumming.  Mikael’s violin and mandolin are eerily beautiful and compliment the whole of the album, raising it above many other albums this year.  Lastly, Kristian’s bass has once again captured my imagination.  This guy writes some of the most inventive, playful bass lines I’ve ever heard.  I remember being wowed by him on “Demon”, but I think he’s trumped that performance already!

One of the biggest standouts of any Gazpacho album, though, is Jan’s exquisite vocals.  He is truly one of the best progressive vocalists out there today, winning hearts with his Muse-y style, heartfelt performance, and creative vocal lines.  He is one of the main reasons why Gazpacho can convey deeply disturbing, thought-provoking content in such an enjoyable fashion.

Yes, “Molok” is a stronger album than “Demon”, and maybe the band’s best to date.  From the pounding drum intro to the staccato stylings of “The Master’s Voice” to the impossibly complex accordion time signatures of “Bela Kiss”, the album starts with a strong trio of near perfect tracks.  The band then moves us through the proggy “Know Your Time” (probably my favorite), the vocally dominated “Choir of Ancestors” and on to the very pure chorus of “ABC”.  Lastly, we get to hear the drum-heavy exercises of “Algorithm”, the pensive “Alarm”, and finally  the epic and somehow anticlimactic (in a good way) “Molok Rising”.  As you can tell, “Molok” is full of variety, but what you may not see in my descriptions are the wonderful instrumentals, the introspective vocal bits, and the incredibly clear mix that brings this all together.  Also, lots of chimes!

“Molok”, then, is yet another strong album in 2015.  It conveys the feeling of watching something monstrous and monolithic being built in the light of a small fire—flickers of heavy moments mixed with dark periods of vocal introspection.  It’s an album that requires many listens, not only because it is so good, but also because you will catch glimpses of various levels of brilliance each time through.  Yes, I think a bonfire tale (do Europeans have those?) is a perfect illustration here.  Haunting, shrouded, and ever searching for light, “Molok” is a must have album this year.