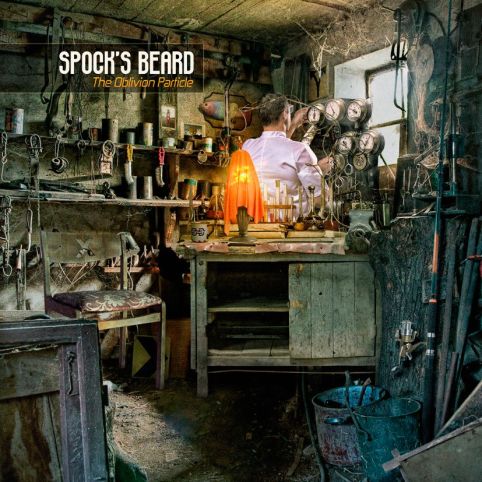 As I’ve been listening to the new album from Spock’s Beard over the last few weeks, I’ve really been struggling to pinpoint my review approach.  I mean, their previous album “Brief Nocturnes and Dreamless Sleep” was, in my opinion, their greatest work—a true masterpiece on every level.  However, expecting that level of work on “The Oblivion Particle” has been my own downfall.  This is an album that I have tried to enjoy, but I just can’t.  I keep waiting for the “aha” listen-through where the album will suddenly click, but it just hasn’t come.  Similarly to the most recent offering from The Tangent, I’m just not feeling the inspiration or point of this new album.

Spock’s Beard is a band that basically has reached legendary status.  The current lineup is Alan Morse on guitar, autoharp, banjolele, electric sitar, and mandolin; Dave Meros on bass; Ryo Okumoto on keyboard; Ted Leonard on lead vocals; and Jimmy Keegan on drums.  Each one of these guys delivers a performance much like you would expect.  Alan’s guitars are intense, Dave’s bass is great, and Jimmy’s drums are, well, there.  Ryo is always a standout with his unique keyboard tone, though he’s not as present as I would like here.  All of these performances are just fine, at least from a technical perspective.

My primary problem with “The Oblivion Particle” is the songwriting.  All but one or two tracks on this record feel flat, uninspired, and forced—almost like they had to make a record under some sort of time crunch.  The songs wander aimlessly, and they never seem to get anywhere.  No genius instrumental climaxes can be found.  No brilliantly catchy melodies that I know this band can write.  Nothing really that catches my ear.

Don’t get me wrong, the album is fine.  It’s solid, but uninteresting.  There are moments of strength in each track, though some tracks feature literally seconds of material that jived with me.  I do enjoy “Hell’s Not Enough” and “A Better Way to Fly” for the most part.  “Bennett Built a Time Machine” is the best song on the album and lives up to their old standards—I really love that track (it’s the main reason this album got a 6 rather than a 4).  Interestingly, Jimmy is on lead vocals on my favorite track.  What does that tell you?  It brings me to my other major issue with “The Oblivion Particle”.

I haven’t addressed Ted Leonard yet.  Now, I really love his voice, but I think we might be showing his face a little too often for his own good.  This is by far his worst performance that I’ve personally heard.  His voice can be heard cracking and sputtering time and time again, especially on one of the yawn-worthy climaxes near the end of “Disappear”.  I mean no insult to him—he’s brilliant—-but this album has phoned-in performance written all over it.

So, what happens when lack of inspiration meets bad vocals and uninteresting lyrics?  “The Oblivion Particle” is born.  From the underwhelming single “Minion” to the ugly “Disappear”, the album just never gets going or has any stay power in my mind.  Don’t take my word for it, though.  Try it yourself.  Maybe I’m just crazy.