Sometimes, even though I feel like I should like a band, they just never click with me.  I’ve tried to like Pyramaze on the last few albums, but something keeps me from it.  They seem to fall into this dead zone of progressive metal that has absolutely no new ideas, no real personality, and no signs of gaining any of that any time soon.  However, the music is usually enjoyable for a quick couple listens.  Their new album “Contingent” is unfortunately more of the same.  If you are a huge Pyramaze fan, you’ll love it.  If you aren’t, you’ll find it dull and uninspired.

Pyramaze consists of Morten Gade Sørensen on drums, Jonah Weingarten on Keyboards, Toke Skjønnemand and Jacob Hansen on guitars, and Terje Harøy on vocals.  These guys are definitely talented players with very tight and hefty riffing, on-point drums, and some attractive composition skills.  Unfortunately, their style of progressive metal is simply overplayed, and they sound like at least a dozen other prog metal bands out there.  Normally, this wouldn’t be a damper on my experience, but Pyramaze especially just composes albums that feel like 100% filler with no real point to any of it.

“Contingent” is all very safe and by the book, with the same sorts of riff-heavy song intros and piano passages throughout the album; and, now that I think about it, throughout their last few albums, too.  Every song has the same structure to it, and it gets tiresome quickly. So, while the album is enjoyable in a purely metal sense, everything is really very predictable.  It has no real personality and is honestly a bit of a slog to get through, as every song sounds exactly the same.  You may end up checking which track you are on every couple minutes, only to be disappointed that you are only on track three out of thirteen.  If I liked this specific style more, I might be able to give it a pass, but I just don’t like this cool guy prog metal that much. 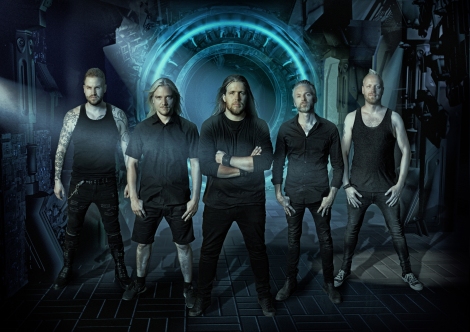 Like I said, the band plays well, and there are some pretty great riffs here, especially on “Kingdom of Solace”.  That particular song is probably my favorite on the album, as it has a little more compositional oomph and diversity than the rest.  I also think that the album closer “Symphony of Tears” is a great song, and I really look forward to hearing it as I progress through the album, and not just because it means I’m at the end.  Toke and Jacob really do provide a satisfying crunch on their riffing throughout the album, and Morten’s drums are loud and proud, too.

Terje does have a good voice, if a bit shouty.  He really reminds me of Brent Smith from Shinedown at times, for some reason.  Similarly, I think the whole album reminds me of a poor early 00’s alt album in metal trappings at times, especially in the choruses.  This alt rock vibe is apparent throughout the album, and I generally don’t mind that sort of thing, but it feels like a forced alt rock album, not a passionate or warm one.  One of the strengths of alternative rock is the raw emotion and anger therein, but “Contingent” has none of that.

Though it’s not as bad as this, I have been making connections between “Contingent” and Circus Maximus’ latest album, “Havoc”.  Why?  Both albums feel forced and very cold.  There is little in the way of originality, but the style is markedly attractive and accessible, only at the expense of good or interesting songs.  While I genuinely dislike the Circus Maximus album, this new Pyramaze album lands squarely in the abyss of indifference.  It’s okay to hear and I even like certain moments, but I have no plans to play the album again.

Pyramaze unfortunately hasn’t carved out their own sound or niche yet.  This album sounds exactly like the last one; and, while certain moments definitely do get your pulse going, the majority of the album feels lackluster and bland.  With all the near masterpiece albums releasing this year, I feel like “Contingent” will simply become lost in the shuffle.