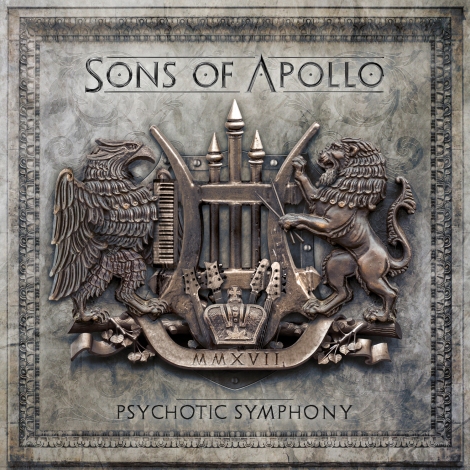 Let’s get this out of the way: There’s no way to review this album without comparing it to Dream Theater. It has two former members of the band, and this is Mike Portnoy’s first real progressive metal album since he left DT. We got some metal with Adrenaline Mob and we heard some progressive rock with Neal Morse and company, but this is the real deal here. Energetic, heavy, complex, heavy, smart, and yes, heavy – this is it. When you put it all together, while you could certainly slap the “For fans of Dream Theater” sticker on it, this isn’t an album that sounds much like Dream Theater, nor does it owe much to the band sonically.  Now that we got that out of the way, is it any good?

Yes. It is good. From the opening track, “God of the Sun,” it’s clear that this is a band with incredible ability, and with song titles like “Opus Maximus” you get the impression that they know exactly how good they are. With Jeff Scott Soto on vocals, Ron “Bumblefoot” Thal on guitars, and Billy Sheehan on bass; there’s a distinctly bluesy, classic rock vibe in Sons of Apollo’s brand of progressive metal. Sherinian also has a way of being recognizable and prominent, but always making room for the guitarists that he’s sharing a stage or a studio with. He and Thal work together very well and complement each other throughout the album.

One thing that makes it work is that there’s a good mix of members who share history, and those who don’t. What also makes it interesting is that the members of Sons of Apollo play like a game of “Six Degrees” (of Kevin Bacon, not Inner Turbulence) with all of the members having played with big name bands that other members have also collaborated with. For example, Thal spent some time with Guns and Roses, and Sherinian worked with Slash, also formerly of Guns and Roses, on one of his solo albums. As another example, Billy Sheehan plays in Mr. Big with Paul Gilbert, who has also done multiple collaborations with Mike Portnoy. So basically, what you have in “Sons of Apollo” is the nexus of decades of rock, metal, and prog cross-pollination.

One critique of the album is that at points it’s a little bit too familiar. This is a supergroup with practically a millennium of experience between them, with members that have played in highly influential bands. It would be virtually impossible for a group like this to get together without hitting some familiar notes – and they do hit familiar notes, but they manage to do something fresh with those notes. “Labyrinth” is perhaps the best example of a song that is largely composed of structures familiar to progressive metal fans, but it’s expertly put together with each member’s unique styles shining throughout, and it is flawlessly executed, down to Sherinian and Thal’s climactic unison solo.  By the end of the song, it’s so good that you don’t really care if you’ve heard some of these beats before.

Lyrically, I can’t tell if it’s deep or just vague enough to sound deep at first glance. Passages like, “Beneath this poison rage/ We dance upon the grave this night/ Discard humanity/ We crave insanity this night” make me say, “That certainly sounded METAL, but is there more to it?” Maybe there is, maybe there isn’t, but the lyrics certainly match the aesthetic well, and Soto’s vocals as a whole are a perfect match for the band.

So what does that leave us with? Five top notch musicians playing familiar notes, but arranged in a unique way. If you’re a fan of any of the individual members, this album is a no brainer. They’re all playing at the top of their game and clearly having a great time. For many of you, I’m assuming you’ve already purchased this and you’re just reading this review to confirm that you have excellent taste. For everyone else, it’s fun, heavy, complex, and filled with great playing. “Psychotic Symphony” is a really solid album, filled with great riffs and amazing musicianship all around.